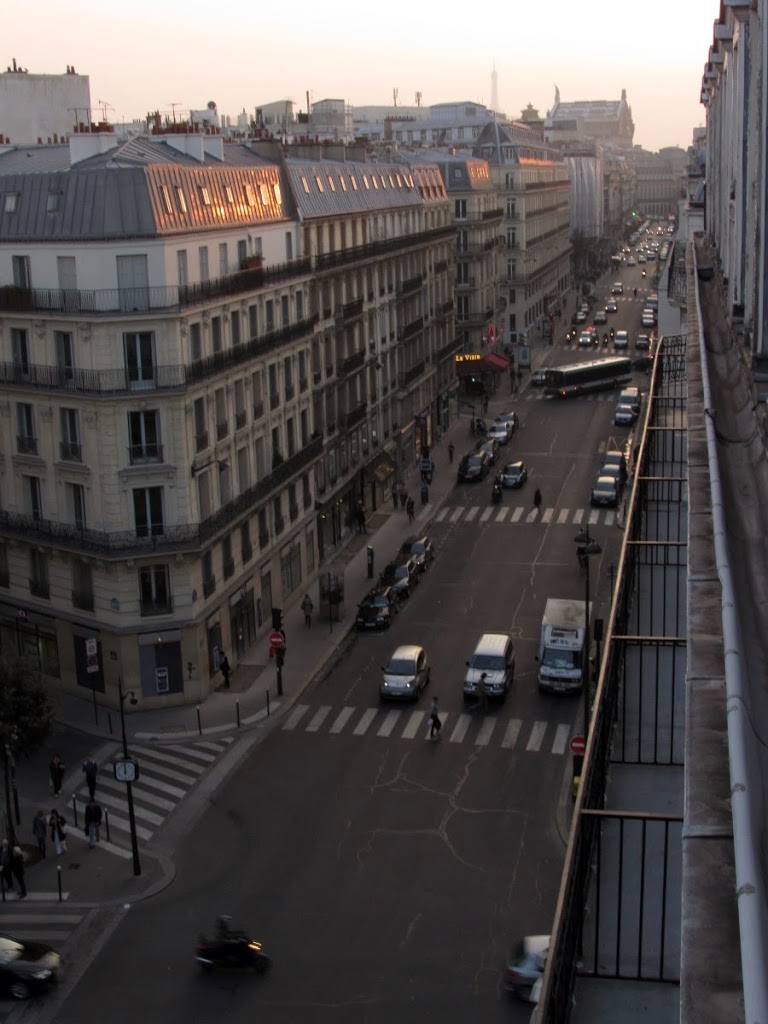 This was shaping up to be a bumper post today, so I’ve decided to split it into sections to share throughout the week so keep your eyes peeled for the rest!

Sam took me away for a lovely four days in Paris last weekend (romantique, non?). The weather was beautiful; perfect for sightseeing.

We spent our time walking, eating, drinking, eating, visiting the iconic landmarks and eating. With so many delicious French foods we wanted to try, we visited a lot of cafés, restaurants and patisseries, and I still didn’t manage to have one of the main things on my ‘to eat’ list – macarons. Good excuse to go back though!

While we were there, Paris was apparently experiencing severe smog, though it wasn’t obvious. This meant that public transport was free, which, for us hopping on and off the Metro, was quite a bonus! This was the view from our hotel room, six floors up in the four star Best Western Opéra Faubourg on Rue La Fayette. See, no sign of smog here!

On our first afternoon we made a beeline for a cake shop and scoffed a delicious, melt-in-the-mouth, chocolatey thing and a zingy citron tart overlooking the Jardin des Tuileries. Definitely a good start to the weekend. 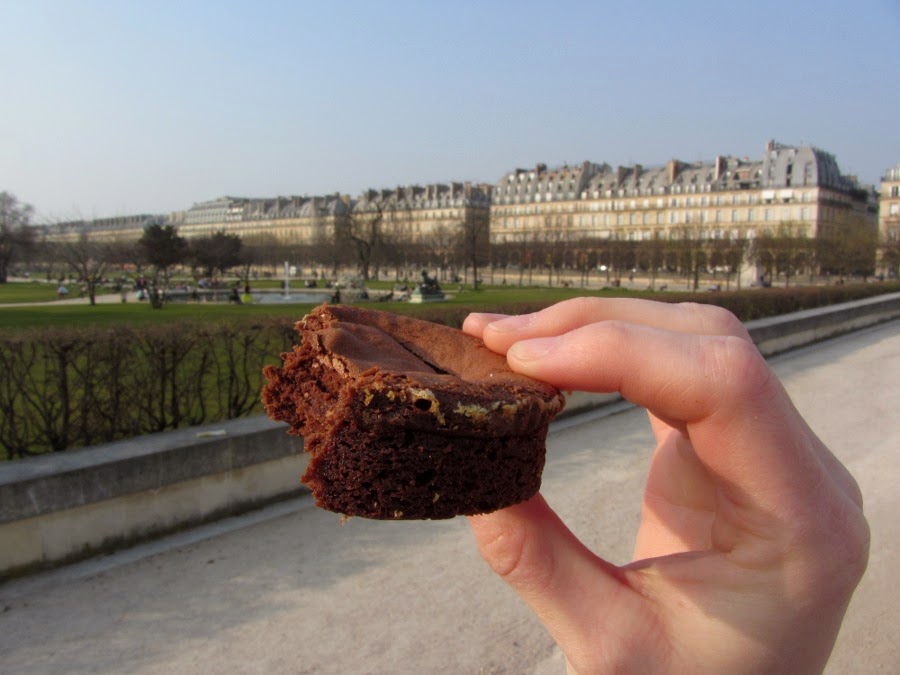 We headed up to Montmartre on Saturday, starting with a walk to see the Moulin Rouge and stopping for a coffee in the Café des Deux Moulins where parts of Amélie were filmed, before wandering around the artist’s stalls and the Sacré Coeur. Then it was off to Le Marais, the Jewish quarter, for a famous falafel pita. 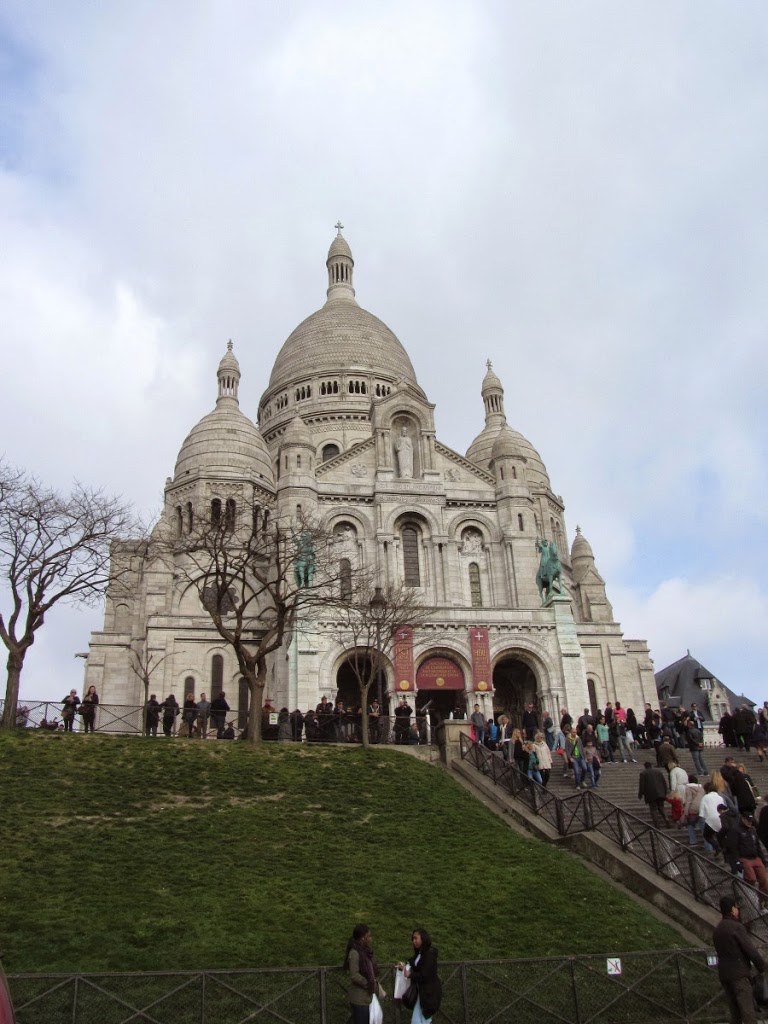 In the evening we decided to go all-out with a three-course meal at the restaurant Au Général Lafayette, opposite our hotel. After a couple of glasses of wine we felt ready to try a very French delicacy which we’ve never been brave enough for before – snails! 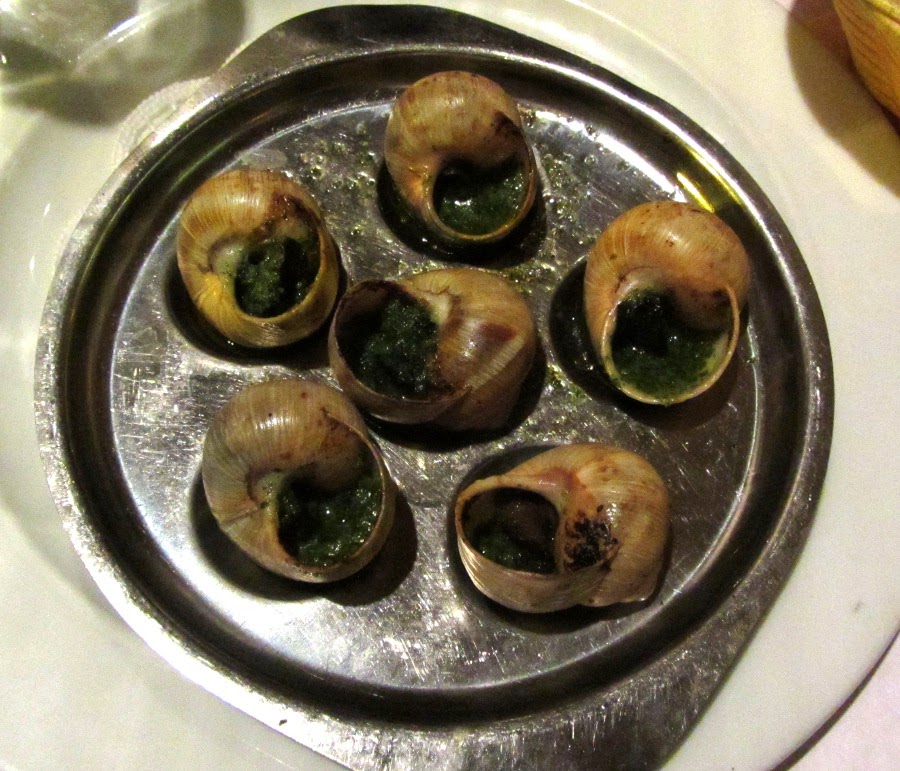 Certainly not the most appetising of dishes, but edible nonetheless. I wouldn’t say we were blown away by the flavour, which was garlicky with a hint of soil, but they weren’t quite as repulsive as we’d thought they may be. Chasing them down with a delicious steak and a crème caramel definitely helped!

Our first stop on Sunday morning was the Marché Mouffetard where we could have gone crazy picking up all sorts of delicious French delights, from cheese and cured meats to chocolate and cakes. Reigning in our desire to try everything, we settled for a couple of wedges of cheese, some salami and a French bagette which Sam carried under his arm like some sort of Parisian accessory.

We spent the day taking in the most iconic sights along the Seine. First on the itinerary was Notre Dame cathedral, near which we popped into the famous Shakespeare bookshop. 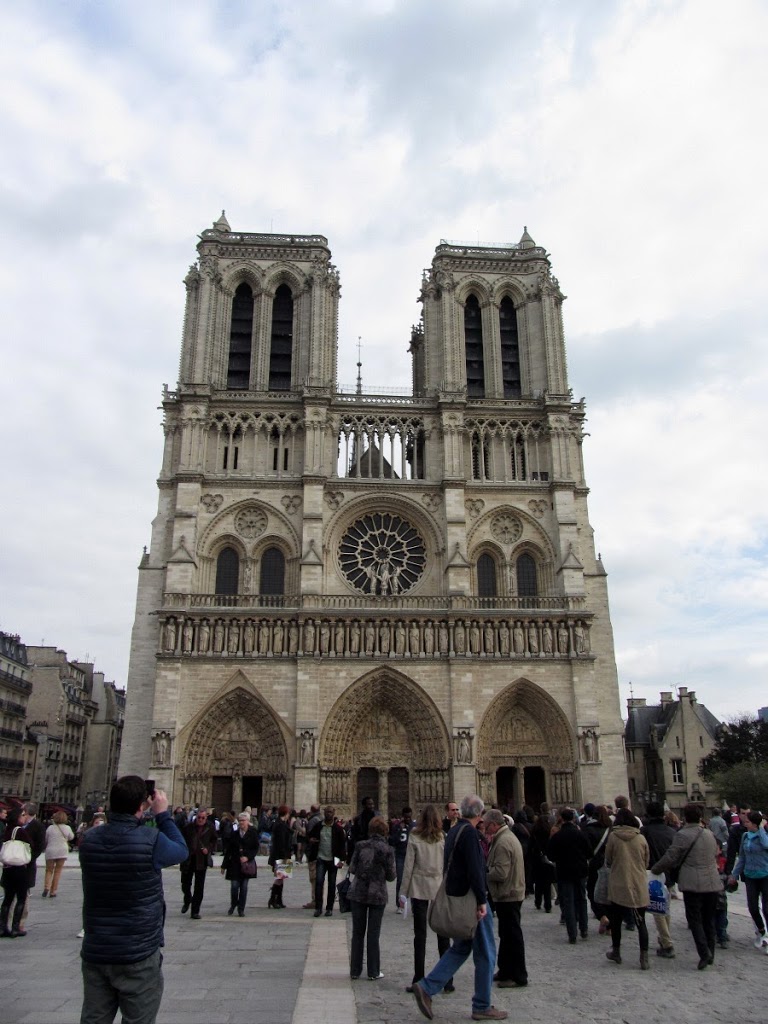 A visit to the Arc de Triomphe was next, followed by a wander down the impressive, tree-lined boulevard of the Champs Élysées. Unable to resist the temptation of our picnic, we devoured half of it outside the Élysées palace where there just happened to be a major showjumping event. 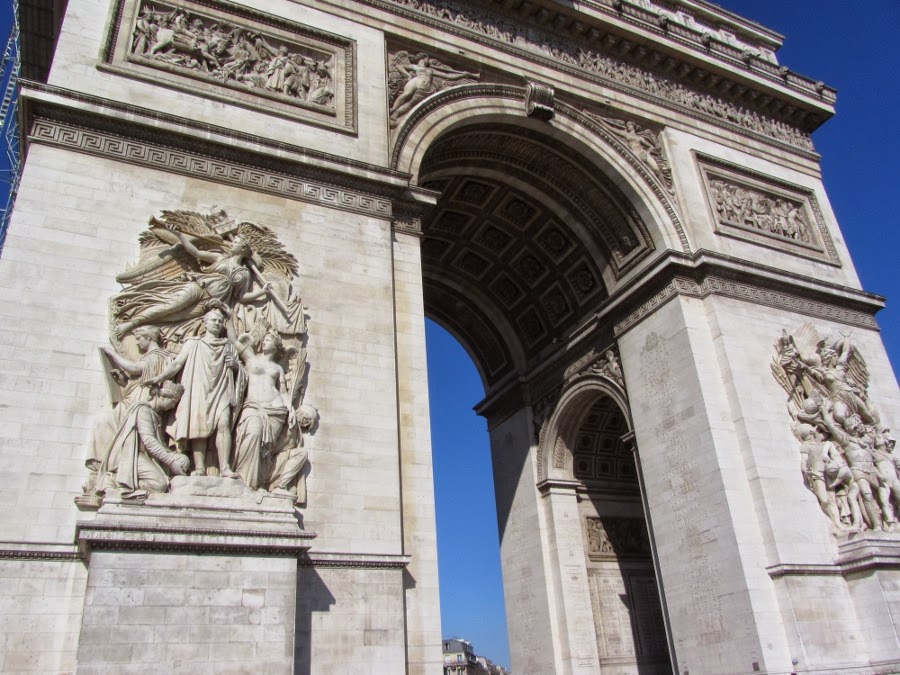 We sat in the sunshine in the Jardin des Tuileries to munch the rest of our picnic before a sunny river cruise along the Seine on board one of the Bateaux Mouches, topped off with an evening climb of the Eiffel tower. 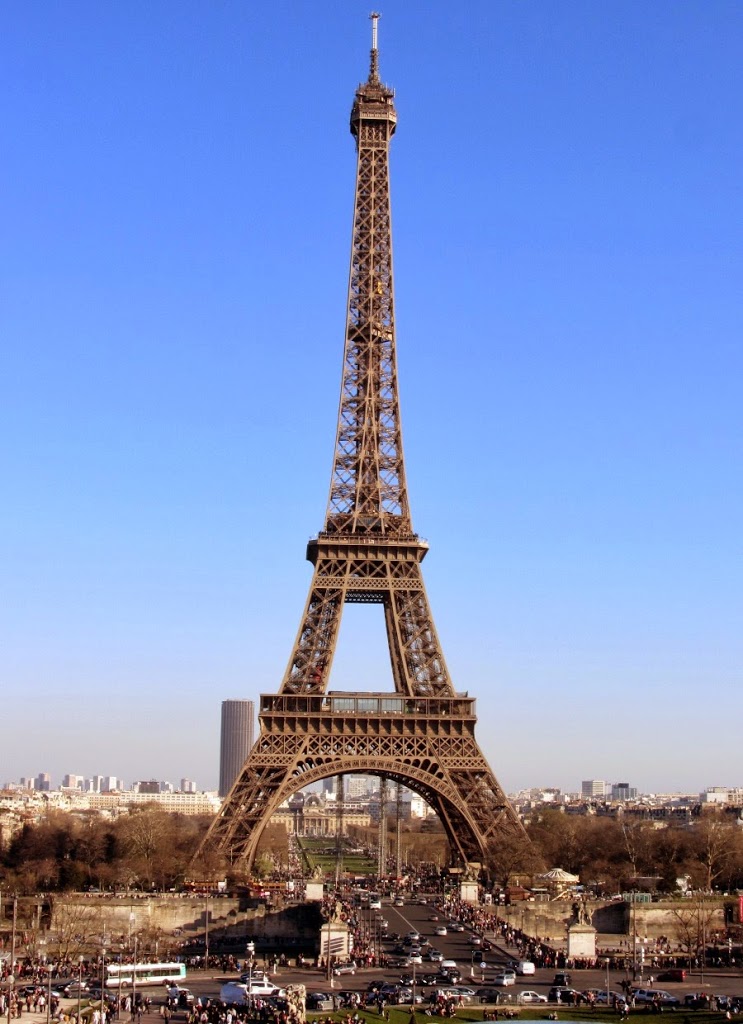 As anyone who’s walked up will know, the climbing the stairs is a challenge, but the incredible views from the top are worth every breathless step! 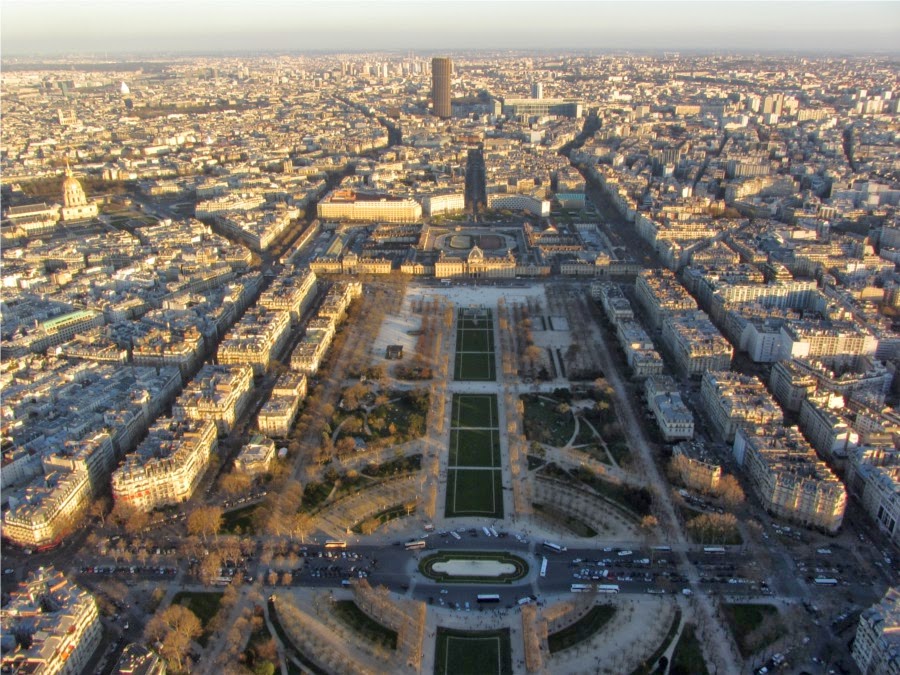 We had to take the customary photo posing with the Eiffel Tower at the bottom! 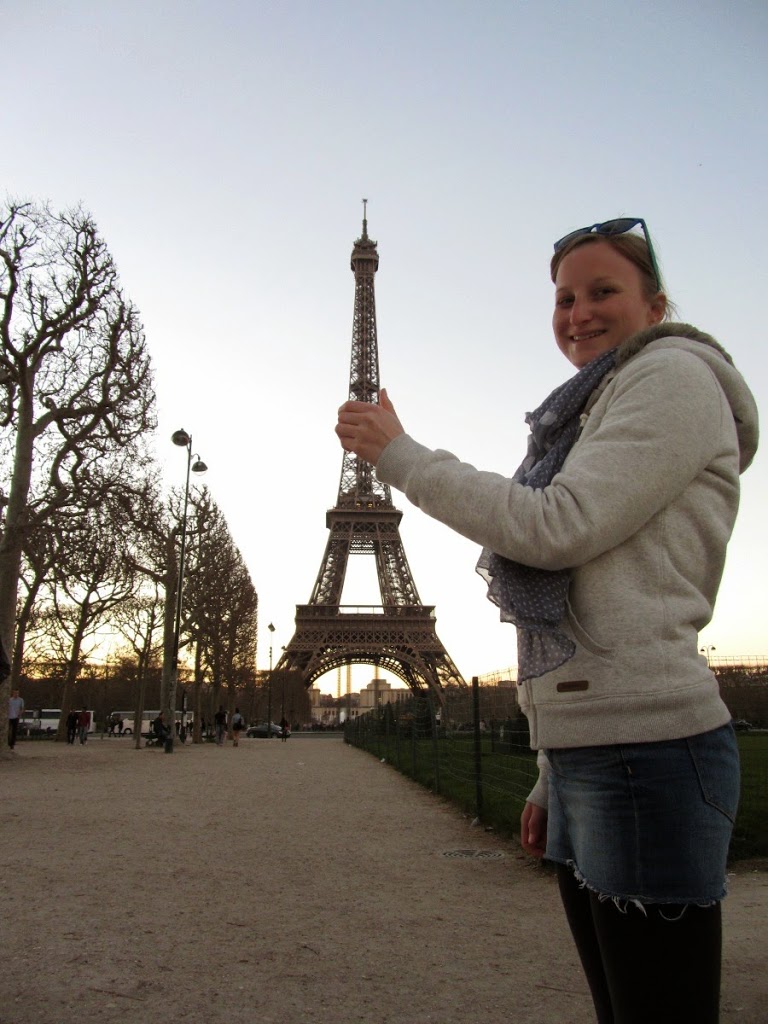 Our final evening’s meal in Paris was at Au Petit Riche, an overwhelmingly French restaurant split into several mirrored rooms with old-fashioned décor and a certain je ne sais quoi! The food was absolutely delicious, oysters followed by tender duck and an almond and pear tart for dessert. I honestly couldn’t fit in another morsel. (Although that might be more due to the fact that prior to dinner I had eaten this, a ‘religieuse’ – could you resist?) 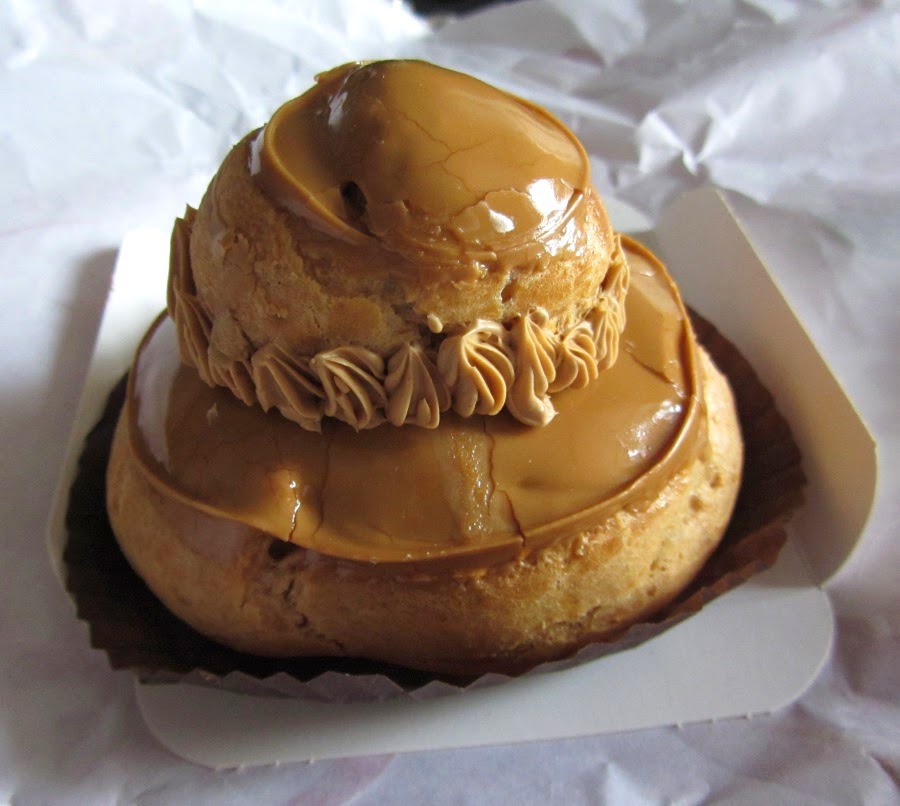 That concludes our long weekend in Paris! It went far too quickly but I’ve no doubt we’ll be back again one day.

I’ll be back with an update on what creative bits and bobs I’ve been working on later in the week, so if you’ve enjoyed this post and would like to see more, please follow using one of the buttons on the left-hand-side. If you feel moved to share this post, that would be lovely too!

No, def no snails, can’t wait for part two x

Should be renamed the food tour of paris! Missed out on macarons though, they are amazing!!

I haven’t been to Paris since a school trip many many years ago but I’d love to go back worth my husband to see it through adult eyes. Your trip sounded fabulous. Mind you i’m not sure how a vegan would fare over there-they aren’t much into non meat/dairy cuisine! I may have to live on pommes frites!
Thank you for the lovely comment on my blog by the way and your new header looks amazing.

I agree, I’m not sure France in general is particularly geared towards vegetarians or vegans! Living off pommes frites doesn’t sound too bad though 🙂 Thanks for commenting on my new header! 🙂

What a yummy trip! My mom used to bake snails, when I was a teenager! They were yummy! Haven’t had them in a long time! Thanks for sharing your food adventure!

They weren’t too bad, Renee, I’m not put off trying them again! 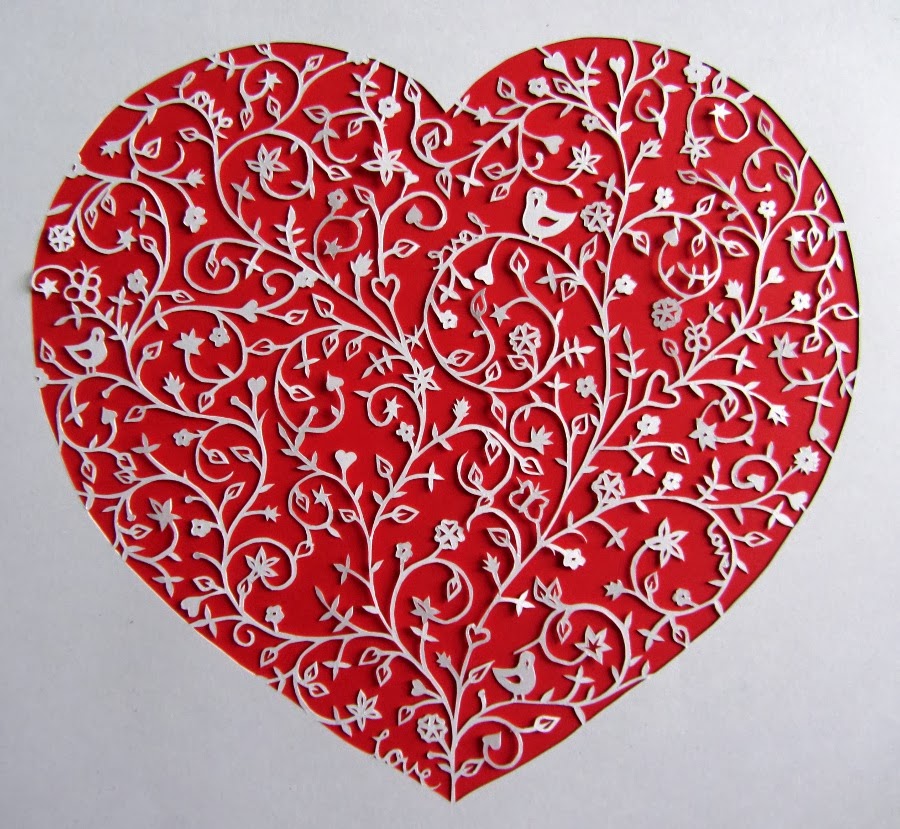 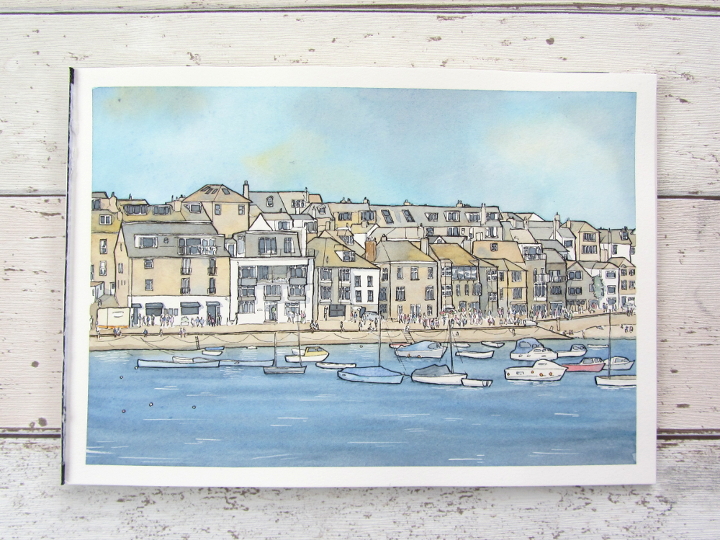 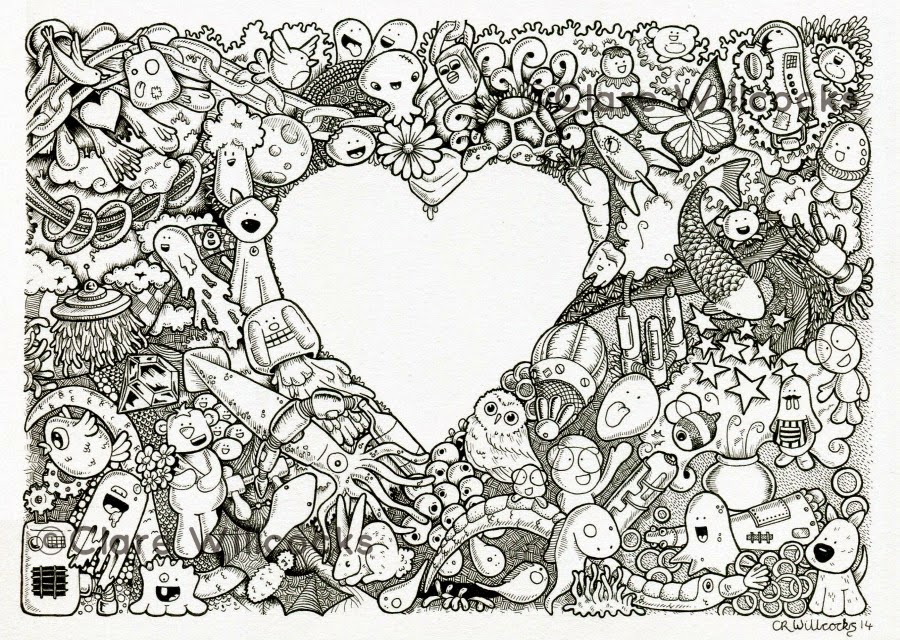