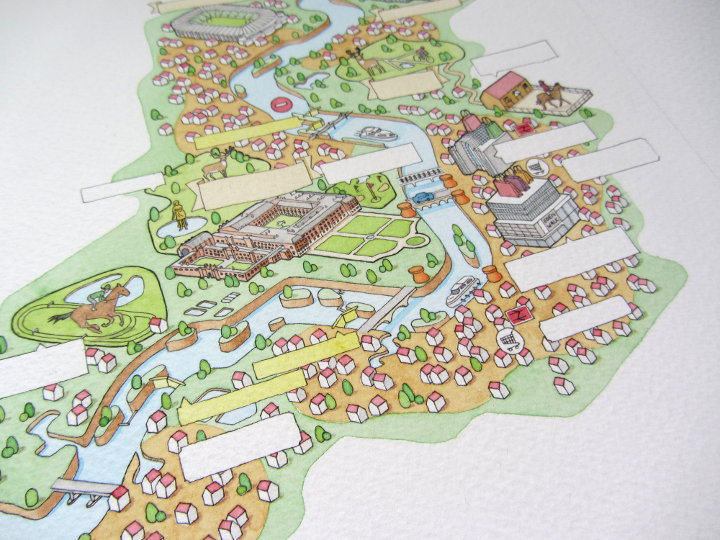 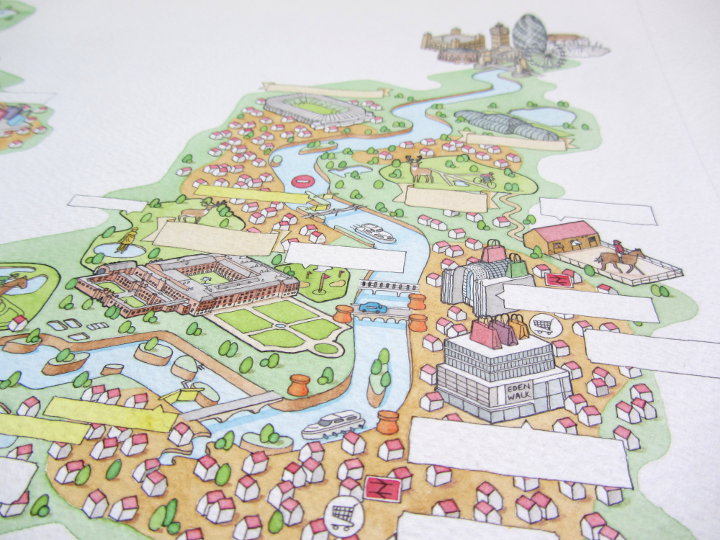 This week I received in the post a copy of the Le Boat‘s Thames guide which features my map illustration at the back. I was so excited to open it and am completely thrilled with how it looks. 15,000 copies have already been printed and it’s due to be translated into other European languages. 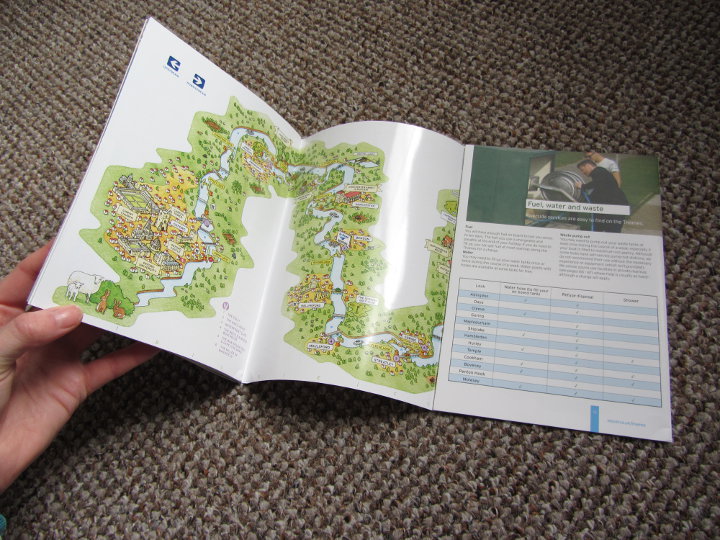 I’ve been blogging in dribs and drabs about this project, so I thought that I’d dedicate this post entirely to the finished map. Firstly, a brief overview of the illustration from start to end. (I warn you now, there are going to be a lot of photos!) 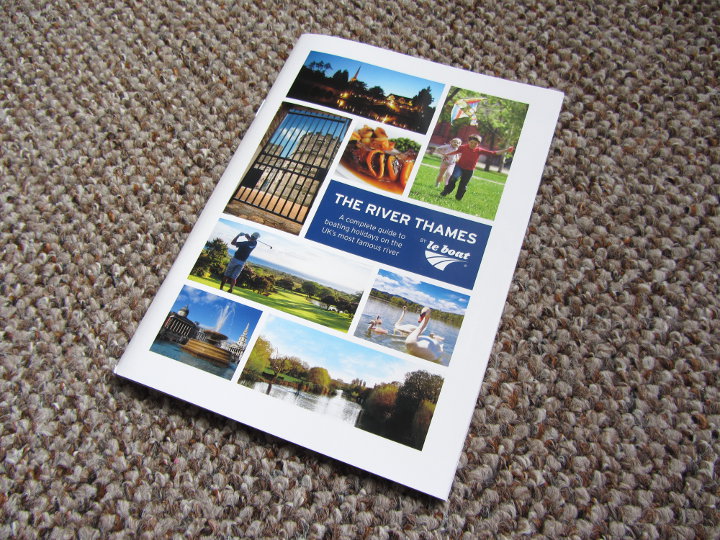 I was very lucky in that the lovely people at Le Boat had created a very detailed draft of which attractions they’d like to include, and a fairly accurate idea of the scale. They wanted it to fit loosely into a wavy line, up and down across the six fold out pages of the brochure. 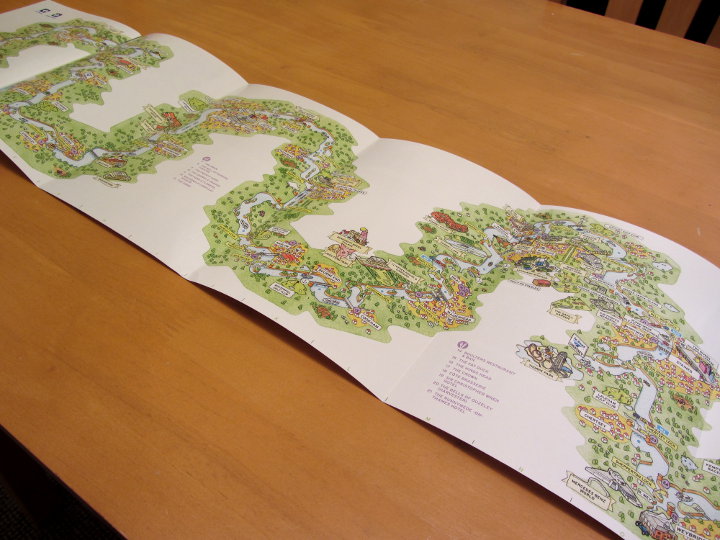 Therefore my first task was ‘forcing’ the curves of the river to fit the wavy line. I was working on A4 panels, which would be reduced to A5 for printing. I used an isometric grid to draw the river so that the angles were uniform across the whole map (I didn’t want the curves to be completely organic, but look a bit like the landscapes in a computer game!).

Next, I drafted each landmark and attraction on a lightbox with the isometric grid to help. The challenge was fitting each attraction in the right place, especially around Windsor! Once I’d got the nod that everything was in the right place, I transferred the whole thing onto a more detailed draft which I then traced onto big sheets of Bockingford watercolour paper. At this stage a few buildings had to be nudged slightly, and a couple of new ones added as per Le Boat’s instructions. 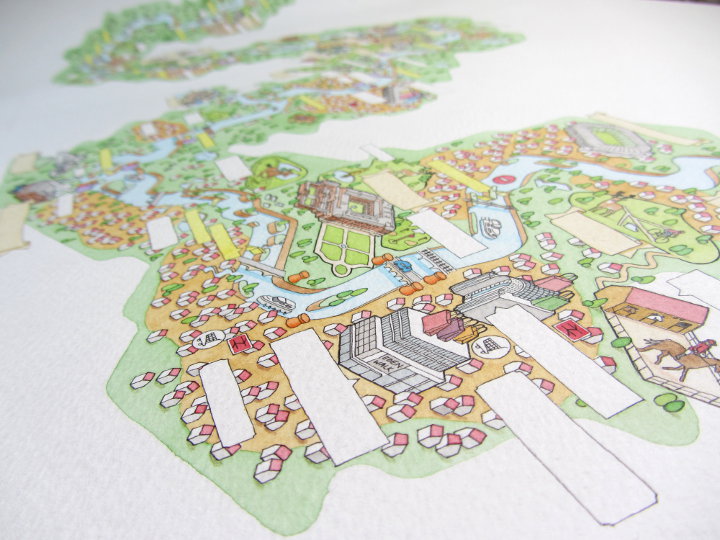 When I was happy with everything I send photos over to get the final sign off from Le Boat. Then it was a case of going in with the fineliner and outlining everything. I was so nervous that I’d make a mistake at this stage.

Worse than that though was beginning the painting! I was actually physically shaking when I made the first strokes! I spent quite a while mixing the colours, particularly the green, blue and sandy colours which formed the largest sections.

Painting took a lot longer than I expected, though I completed the majority of it on holiday in a beautiful cottage in Cornwall, so it wasn’t too bad! 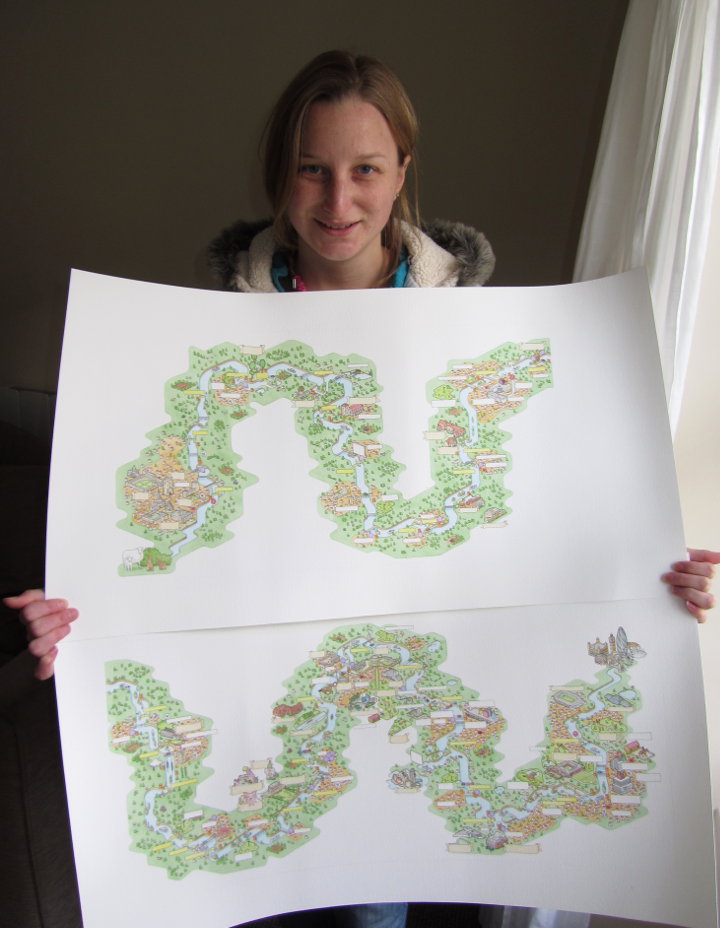 When it was all finished I breathed a sigh of relief and scanned it in sections to send to the designer at Le Boat for digital manipulation into one large image. They added all of the text, markers to show approximately how far you can travel in an hour and even a little rubber duck which I painted as a spot the duck competition! 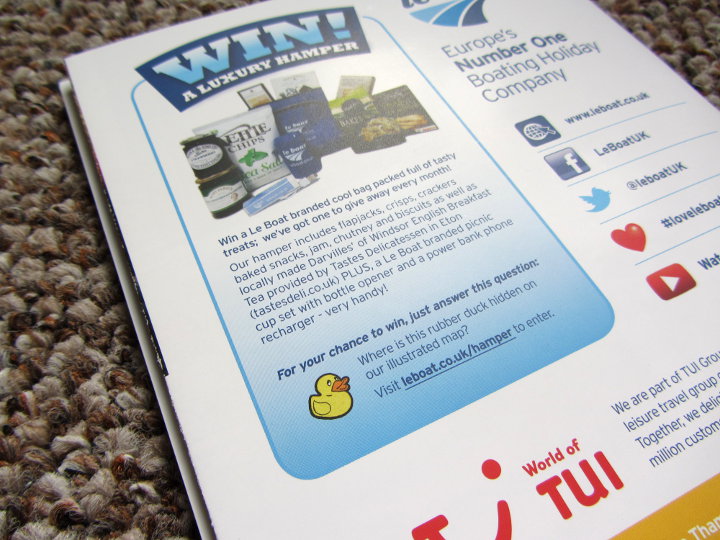 Just in case you haven’t seen enough pictures, I’ve taken a close up photo of each section and added them to the album below. Click on an image to see an enlarged version.

If you still haven’t seen enough, hopefully the video below of the entire project (complete with cheesy music) will do the trick!

Finally, here’s this week’s miniature portrait for my 52 faces challenge. I drew Liam Neeson because we watched Taken 3 and think he’s a great actor! 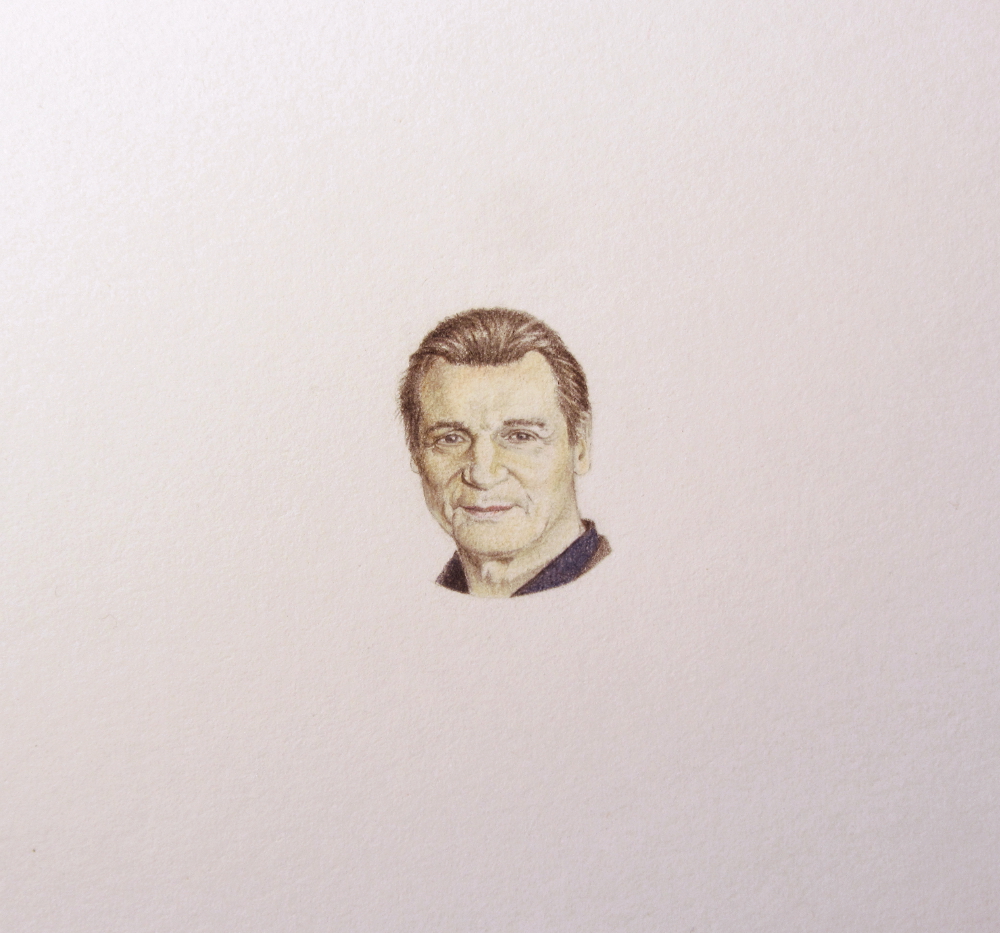 That’s it for today, congratulations if you managed to read right to the end of this post, it is a bit of a whopper!

Wow, how absolutely fabulous. You obviously put so much work into this project but the end result is wonderful. Well done you! Xx

Thanks Suze! It was the biggest illustration I’ve ever done so I’m so glad it turned out alright!

I’ve been so looking forward to seeing your completed map and it look amaaaazing! All the little details are so wonderful and your style is so clear and consistent, i’m sure the people who commissioned it are over the moon, well done you! x

Thank you so much! I’m thrilled with it! 😀

Clare, this is absolutely beautiful! I am sure you are so proud of all the long hours you put into this project. And, then to see your lovely work in print. Congrats!

Oh wow! That is amazing! The map is so beautiful and so detailed. Congratulations, you did an incredible job! Your face is fantastic as well.

It’s so nice to see the whole thing and the behind the scenes “making it happen”. Thanks for sharing.
Do you have a plan for your minutes at the end of the year? Some sort of sample art maybe?

Love the map so much better to look at that the normal ones, has more interest

It’s amazing Clare, you should be so proud of your achievement, and what a great project to be able to say I drew this.

Your map is just wonderful. I love the fact that I can imagine that one of the little houses near Kingston is mine!

Wonderful to finally see it in print Clare. All those hours of work paid off in the end. Very proud of you 🙂

Wow, they are amazing!!! You are SO talented xx You must have been so proud to see it in print xx

Your work is seriously insanely good! lol I shared with my hubby just now and he was blown away. He’s got degree in Art and he’s like – whoa! That’s bonkers! 😀

I’ve loved seeing the stages of your map coming together, I’ve followed it over on your face book page. The finished brochure looks brilliant. The originals would look wonderful framed and hung in pride of place in your home/studio. Well done 🙂
Jan x

You’ll never guess what arrived in the post this morning?! Your work looks great in the brochure, absolutely fab!!

On receipt of my Le Boat brochure and after looking through it I thought how brilliant, thanks to the map of the Thames. This was the best little brochure I have ever received but mainly due to your artwork.

Well done Claire, what a massive piece of work and no accidents. Where can we obtain this brochure with your map in it? You made me smile about how younwhere so nervous putting b your first strokes to paper. Goodcjob though, You must be very immensely proud to see younefforts in print.. 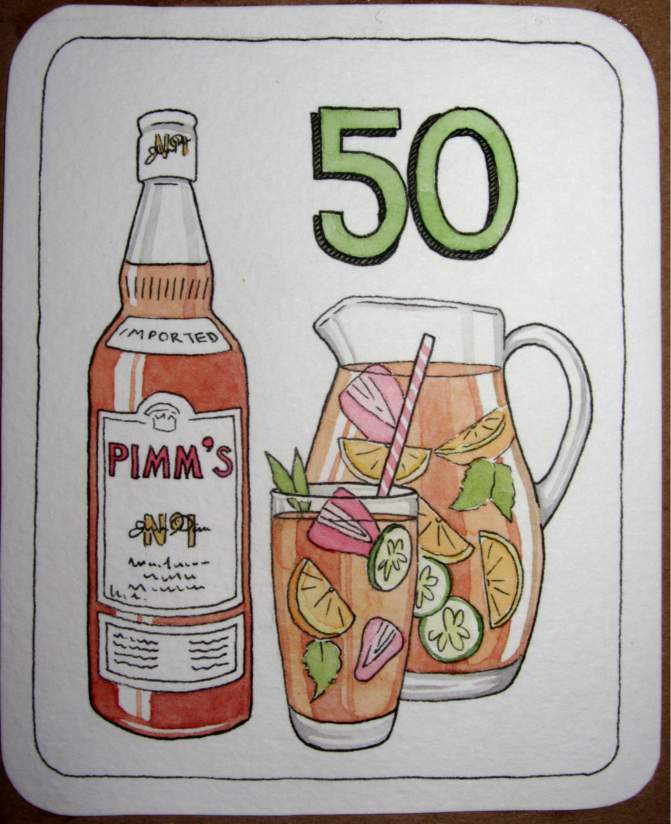 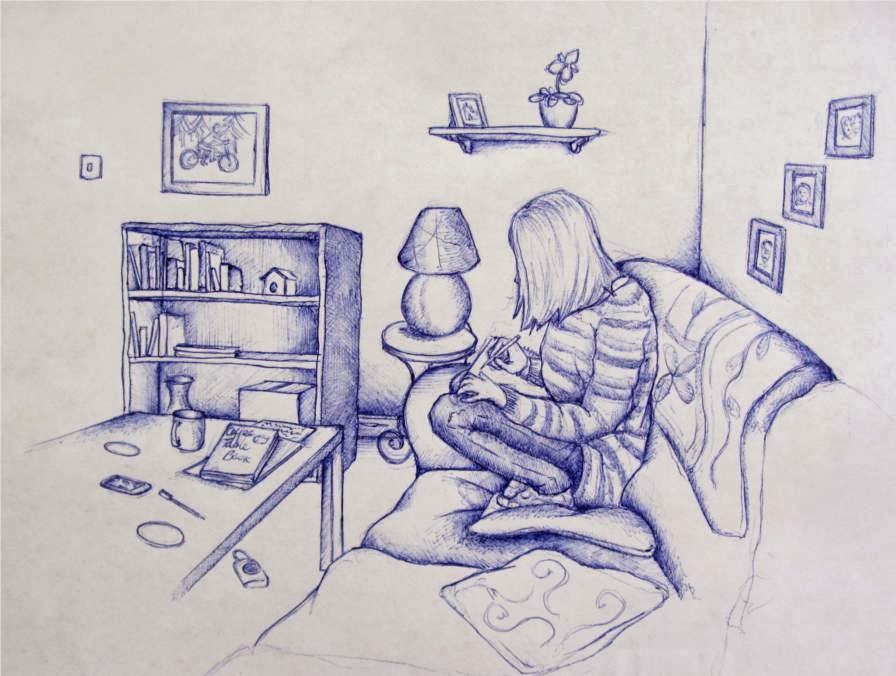