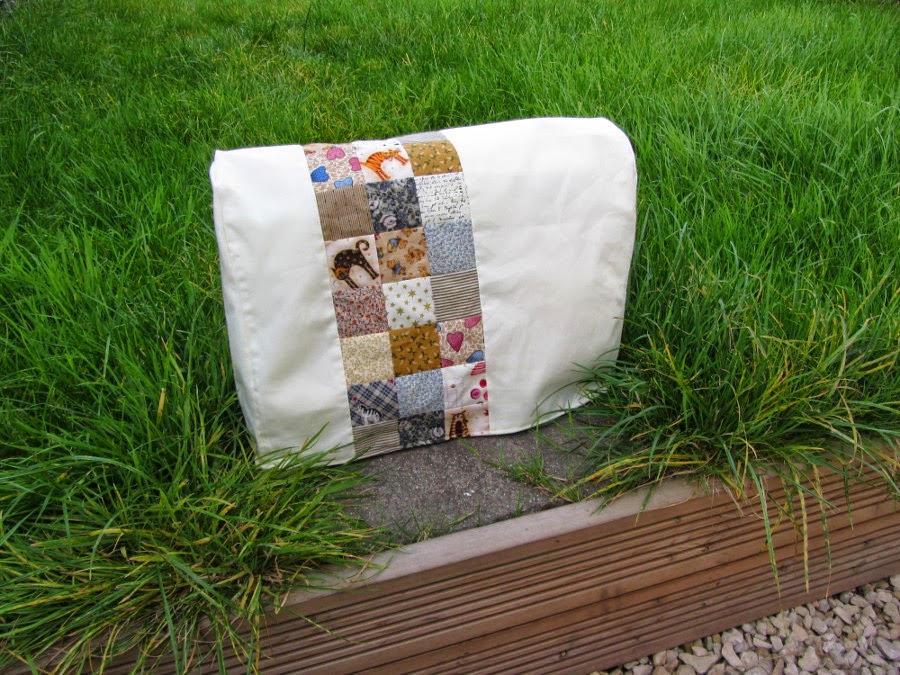 Since I got my sewing machine for Christmas I have been meaning to make a dust cover for it and today was the day!

I had the whole afternoon to myself so had plenty of time to work on it.

I was inspired by a cover I saw on Pinterest which has a strip of patchwork squares down one side. I really liked the effect and haven’t tried patchwork squares before, so thought it would be a bit of a challenge. 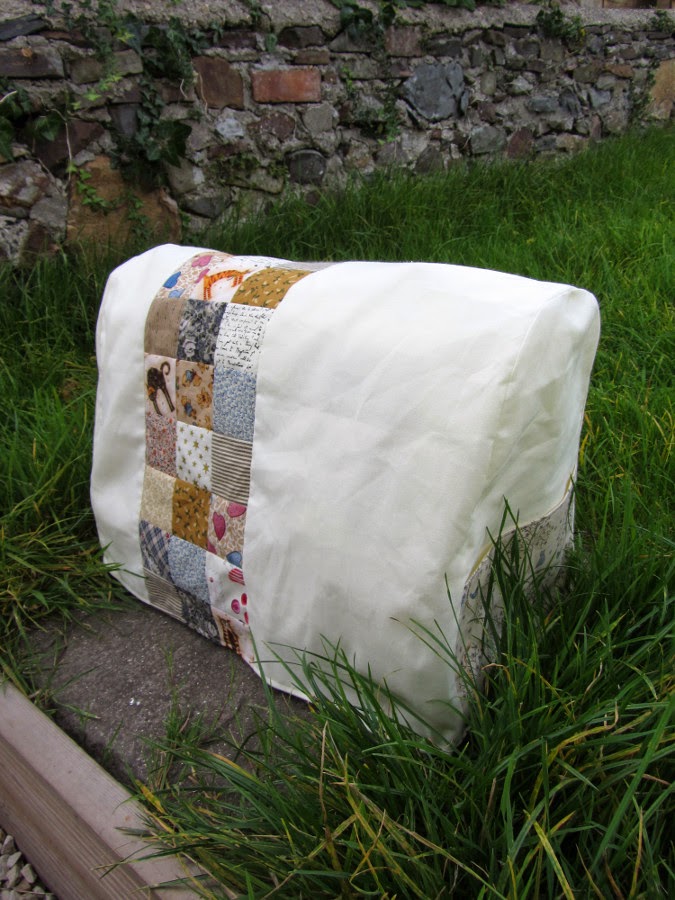 I know from my Mum that patchwork squares aren’t the easiest things to get right. They must all be perfect so that they line up correctly. I have to admit that mine are a teensy bit off in places, but overall I’m happy!

The first challenge was cutting out all the squares precisely. Sam’s Mum swears by a circular cutter and I definitely could have done with one for this! It took ages to cut them all out, but worth it to get them accurate. 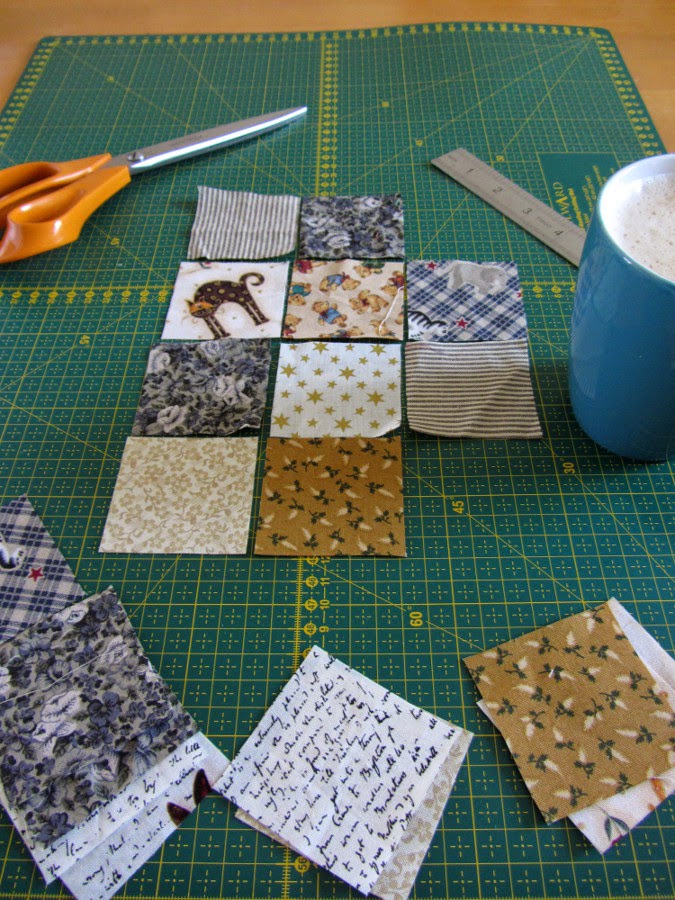 Armed with a cup of coffee (which was definitely needed after cutting out all those squares!) I sat down and organised them into rows of three. 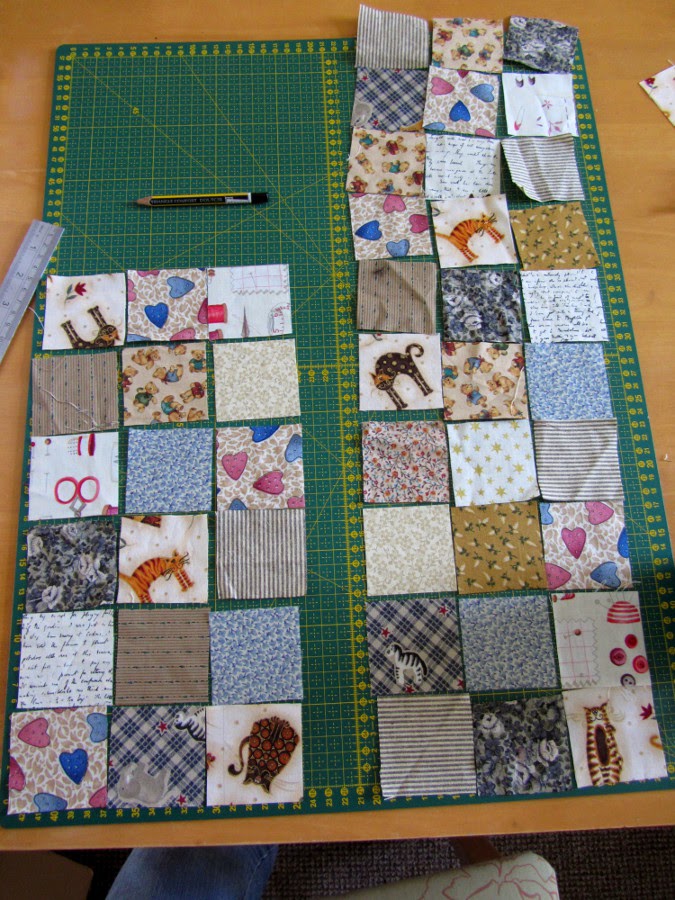 I sewed each row of three and then matched and pinned each row to the next before sewing in place. The fabric is from a scrap bag very kindly donated to me by my Auntie. If you follow my blog, you may recognise some scraps from another project. 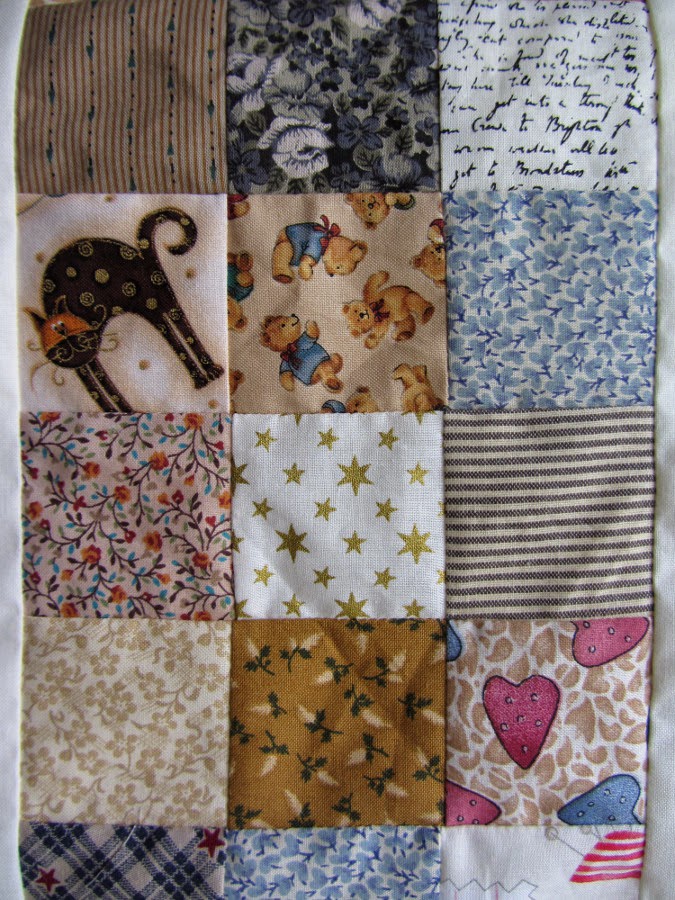 We also bought some more storage units this weekend – the sewing machine fits perfectly and I think it completes my little craft corner nicely. On the top is an old Singer sewing machine I bought from the tip! 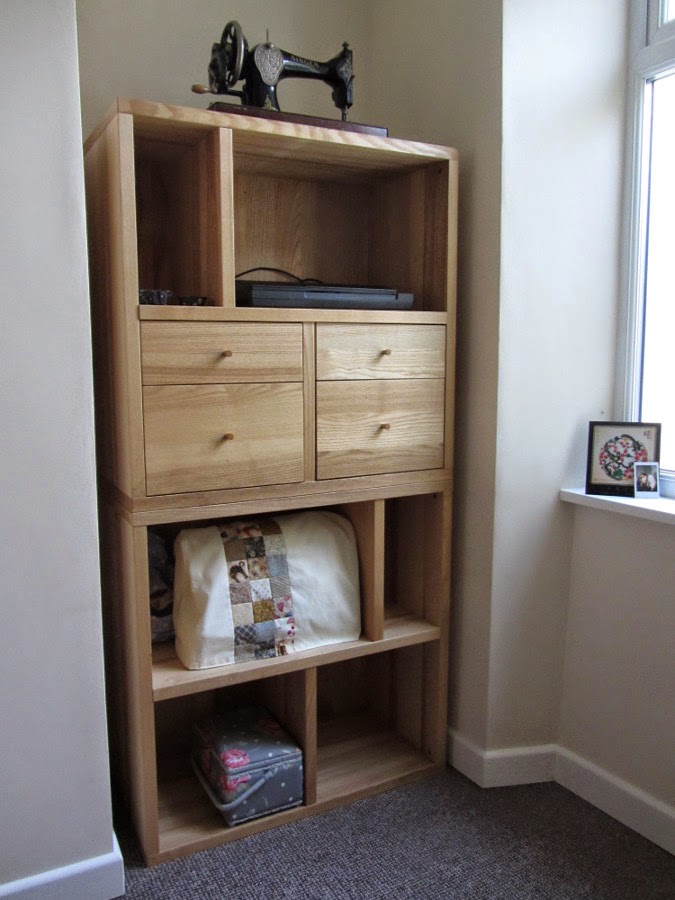 This week I’ve also done another six second sketch. I’ve decided to do a series of mini portraits of people with funny expressions so first up is Bruce Forsyth! I’m tempted to try and go even smaller! 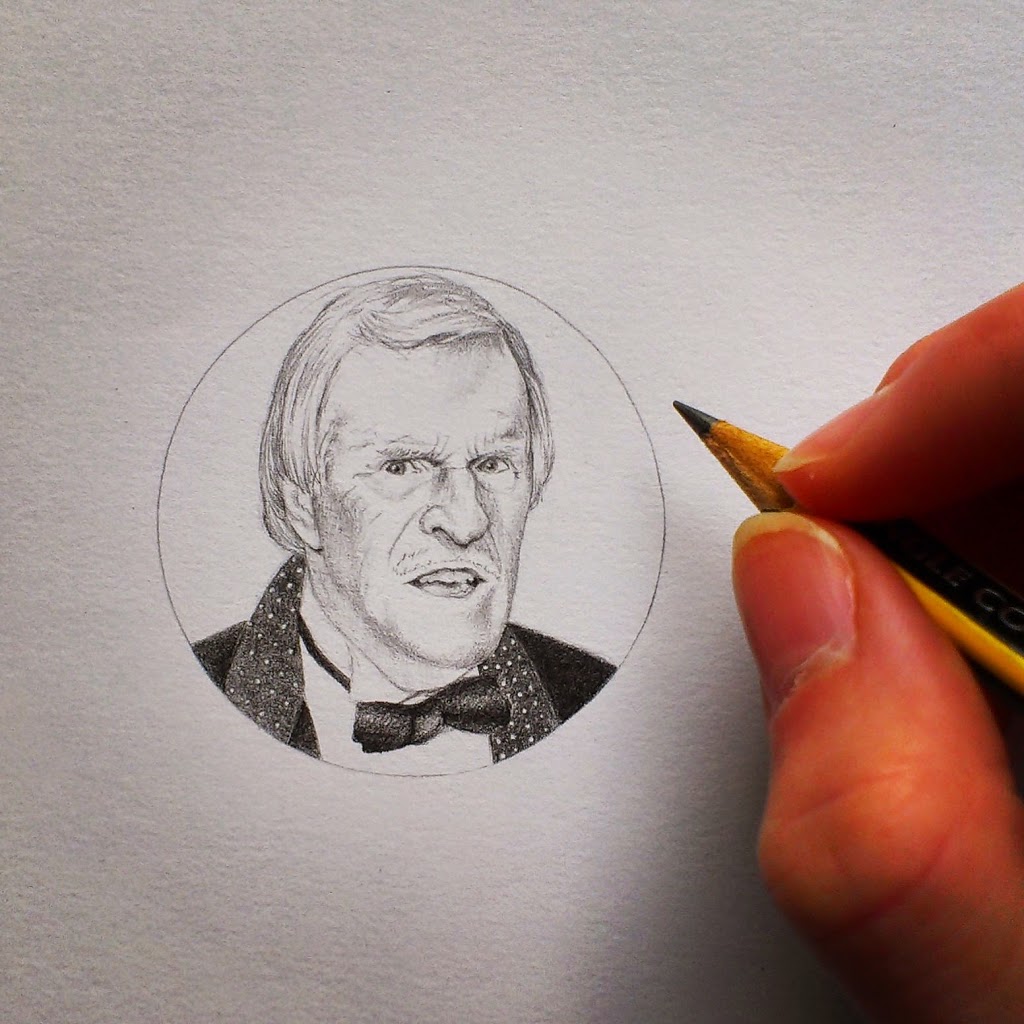 This is a piece I finished earlier in the year which I can share now the couple have now received it as a wedding present. It’s a large heart filled with lots of elements which are significant to them. 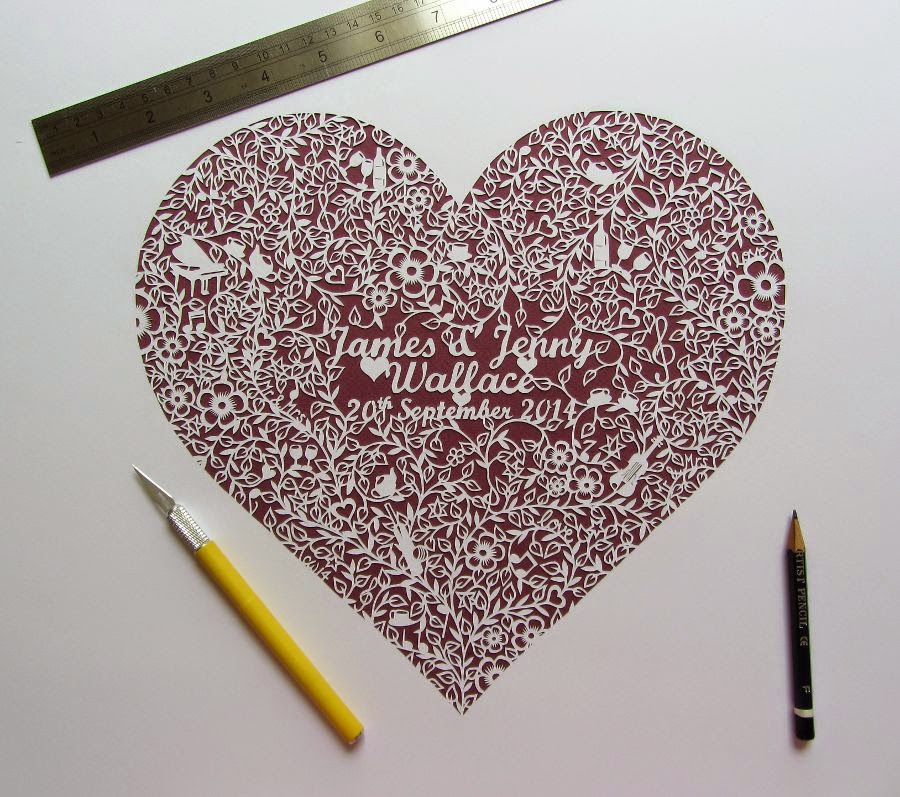 I drew the design from scratch and then cut it out by hand. 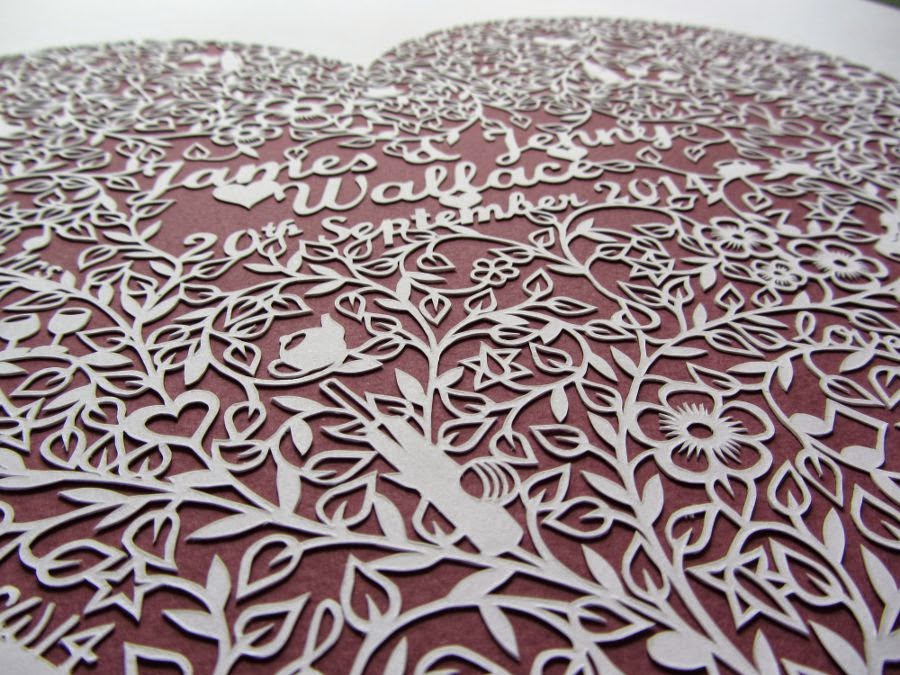 That’s it for today, keep an eye on my Etsy shop as I’ll hopefully be adding another doodle to download as a colouring page this week!

So much to look at Clare! Perfect cover for your sewing machine and i do like your new strorage units. I’m sure the recipients of the paper cut heart will be over the moon with your creation. Lovely portrait of Bruce 🙂

Oh wow, how on earth do you get so much detail in your papercuts! What a work of art, i bet the couple are thrilled. Love the patchwork dust cover too 🙂 x

Just a lot of patience I think! Thank you 😀

Your sewing machine cover looks fab. I love the little cat pieces. Your papercutting is amazing. You must have such patience.
Ali xx

The cat pieces are my favourite too! 😀

Your sewing machine cover came out great. It’s look perfect with all the little square you stitched together. It really amazes me how intricate and beautiful your designs are – I love this wedding heart you created. Have a wonderful, fun, week 🙂

Thank you 🙂 I’m working on another one now, this time in paper so it’s a little more flimsy. Just hope I don’t tear it! x

The papercut heart is so delicately beautiful they must have been very happy with it. You cover has turned out well – you have done it the hard way – you really do need a rotary cutter!

I think that a rotary cutter will definitely be on my Christmas list this year! x

WoW – how perfect is that and I LUV the little kitties on the patches 😀 Great new unit.
The wedding cut out is AWESOME !!!!

I know, I love the unit!! Sam’s been keeping an eye out on ebay for a while…he does come in useful for some things 😀 x

I love the patchwork cover, I’m trying improve my sewing skills, I may have to try some little patchwork squares too. Your papercut for the wedding is amazing, as always.

Thanks Lucy, and thank you for your continued support on my blog! I really appreciate you taking the time to comment each week 😀 Good luck with your sewing, as Louisa said below, the patchwork really is therapeutic! x

I am teaching myself quilting and patchwork. It is very therapeutic once you are past the cutting out stage. Your cutout paper is stunning. Do you use special paper or stabiliser to stop it from tearing? #handmademonday

Yes, it certainly is! There’s something very rewarding about getting the squares to line up right, it’s like a little victory each time you sew it perfectly!

I used thin card for this one, but normally I just use paper. Nothing special, just not really cheap stuff! The key to not tearing is cutting with a very sharp blade and not pressing too hard so it doesn’t get blunt 🙂

I don’t know where to start. The machine cover is really cute. I love the squares with the cats. Brucey is fab (is he OK, or just having a rest from Strictly?), but the wedding heart is sublime.

I hope he’s OK! I don’t really know, just thought he’d be a great character to draw! Thank you for your comments and for popping by my blog each week, I really appreciate you taking the time 😀 x 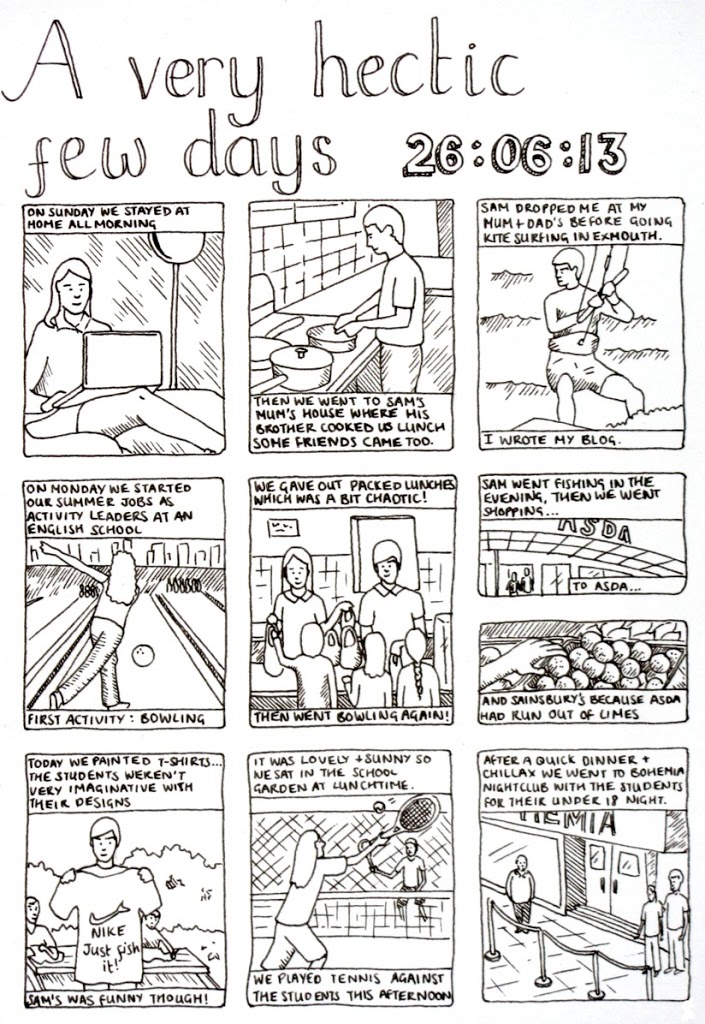 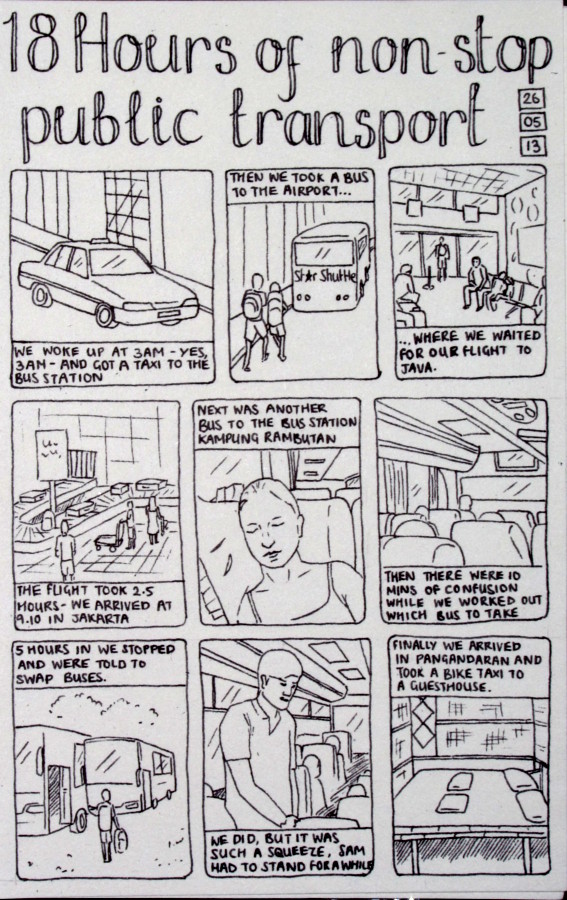 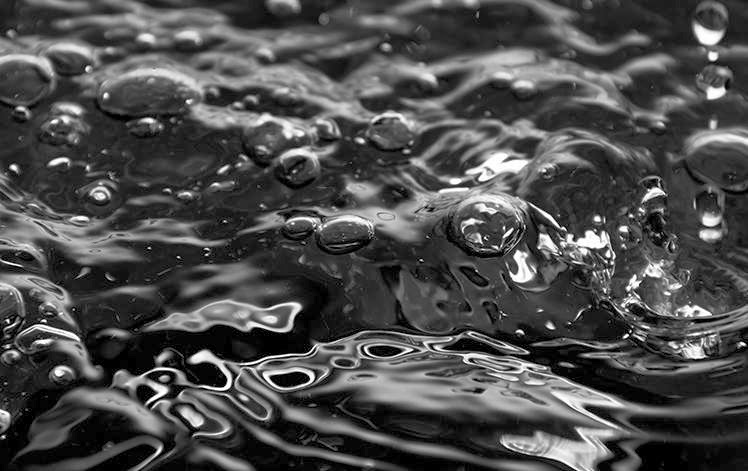